Bagels are small, round bread that comes in a variety of flavors. The bagel has been around since the 16th century and was originally made without yeast. Bagels are usually boiled for a few minutes before baking them, which gives them their signature chewy texture. Bagels can be topped with anything from sesame seeds to poppy seeds or even garlic powder. A favorite topping is cream cheese which is why it’s so popular as an appetizer at parties! They’re a staple at any coffee shop, deli, or diner, and they always come with cream cheese. Bagels can be sweet or savory, but they make for a great breakfast sandwich in minutes no matter what you put on them. 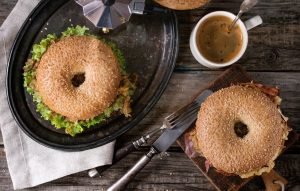 Should bagels be omitted from the list of foods that diabetics should avoid?

Bagels have long been considered a healthy food choice for many, and some don’t understand why they would be on the list. For those who suffer from diabetes, though, there is more to consider than taste, mouthfeel or texture.

Bagels, as well as white bread, are made of flour, water, yeast and a few other ingredients. The white flour in your average bagel is no different from that of a loaf of white bread. Today it’s common knowledge that plain, white bread is bad for people with diabetes. It quickly raises blood glucose levels just as fast as table sugar does.

Read More About: How To Make A Perfect Bagel 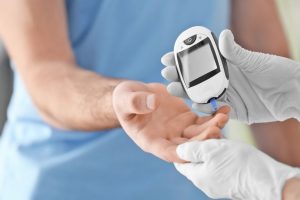 How could a bagel be worse than bread?

One slice of white bread provides 60-80 calories in the form of carbohydrates. Two slices of toast or bread for a sandwich amounts to about 150 calories. How many calories does a mini bagel have? A regular-size bagel has 250 to 300 calories, while the smaller version of the same food only provides 150, whereas one of the popular over-sized varieties can be as much as 500 calories! Contrary to traditional wisdom, a bagel is potentially worse for you than bread. Even if you don’t eat the whole thing, a large bagel will add as many as seven to eight slices worth of bread.

Read More About: How To Make Bagels And Their History

All bagels are not alike in other nutritional aspects.

For example, a whole wheat bagel has about the same number of calories as an average French toast bagel (250 to 300 calories), but its sugar content is around one third that of the French toast, and it contains three times the fiber. Whole grains take longer for the body to process, so they do not substantially raise a person’s blood sugar. Dietary fiber helps your digestive system, making you feel full after eating. A cheese-loaded bagel will be high in fat content than a raisin or blueberry bagel.

Two tablespoons of reduced-fat cream cheese will add about 70 calories. It’s a good choice for breakfast or lunch. However, two tablespoons of peanut butter, mayonnaise-based spread, or butter can add up to 200 calories. A better choice is ten calories a serving of sugar-free preserves or 50 calories for lean turkey.

So Should Diabetics Eat Bagels?

People are fond of bagels because the texture is unique. It feels like you’re consuming more when they require more effort to eat. That’s not bad for people who have diabetes, as they are often deprived of good eating habits. Despite a diabetic’s strict dietary requirements, some carbohydrates will not raise blood sugar levels as drastically. Eating a small whole-wheat bagel with low-fat cream cheese can satisfy an addicting craving without breaking the diet.